Welcome to the rabbit hole! This is an introduction to for beginners to make the most of a terminal. Windows is covered. But, because Microsoft ditched its command line (CLI) battle ground in favor of GUI until a few years ago, this article will shift to *nix environment eventually. Generally, programmers that pursue productivity should be should be proficient at *nix. By no means am I am criticizing Windows. You know, "Finally, it's the year of desktop Linux" has been echoing for 20 years. 🙄

Hackers are obsessed with abstraction to eliminate repetitive tasks. How could we stand with manually typing everything?

A Tale of Two Editing Modes

Though the holy wars between two editors Vim and Emacs are fading away, long live their spirit.

Because a single line editing is so efficient in emacs, people made a library called readline. Just pay a little more heed you will find it is everywhere. You can use in most application in macOS, interactive cli tools such as ptpython, mycli, and pgcli. There is even a tool with-readline to empower you on tools that do not natively support readline style key bindings. I just list some frequent shortcuts. Youo can find a comprehensive list of shortcuts on wikipedia or its official docs.

Also, there is a cheat sheet¹ for you to remember these key bindings.

Luckily, although it's not easy to use this emacs style key bindings on cmd.exe, clink is made available.

In short, the vim mode is best for multi-line editing, while the emacs mode makes you efficient in line editing.

Can it be faster? Yes. Modern customizable shells such as bash and fish can complete the whole path for you easily with the help of plugins. Zsh just has this builtin. Just typing command /U/u/i/d/f/file followed by tab, you get the whole command line completed.

What if it is a previous command that you have already typed? I believe you the smart know Ctrl-p does the trick if the command is the just the previous one you have entered. You may press Ctrl-p multiple times if it's not the last one.

What do you do if it's buried in thousands of command lines you've entered? Search the history. Most readline applications has Ctrl-r that supports fuzzy matching.

I bet you are not capable of rememrbing command options. And that could be distraous. We complete command line options as well.

There is an example that the shell tries to complete the commit that I would like to fixup.

None of the shells designed for Windows is able to provide you with these powerful functionalities as far as I know.

Imagine you have to constantly switching between two directories ~/src/third_party/package/library/ and ~/src. It is easy to go back to the short one by just entering cd or cd ~ to the home directory and then cd src. But, how to you change into the long directory quickly? Treat these directories like a stack! pushd/popd is supported on both cmd.exe and *nix shells.

What if you have multiple directories, say 5, to jump among? In zsh, cd - followed by TAB will let you choose one of the directories in the $dirstack. I am lazier. I just enter z library to jump to the long one. There is a well known tool called autojump. But people who could not tolerate the slow Python implementation developed their own solutions. z.lua looks prominent.

Typing a few keywords in Google takes you to almost whatever your want, it's also possible in both the desktop and cli environments. In the last decade, quick launchers have been quite prevailing. Alfred hits its hey day for Mac users. Even Apple has copied its fuzzy searching idea into Spotlight on macOs and iOS. On Windows you could find an arbitraty file on disk in milliseconds as long as the filesystem is NTFS, way faster than Windows Key + search. To tell you a secret, I use Listary rather than Everything.

There are many fuzzy matching tools for cli. The most popular one is fzf. It is powerful combined with other commands via unix pipes. E.g. I would like to print the first 5 lines of a file of which "Rename" is a part of the filename. Yeah, there is a sophisticated command for it find . -type f -name "*Rename*" -exec head -5 {} \;. How about his one?

The idea has recently gained popularity. People even coined a term CLUI.

I Have A Nickname

Greed is good. You might want to sequeeze the terminal's ability by reducing more repetitive key strokes. Ctrl-r to restore your good ol' git log --left-right --graph --oneline --cherry is not satisfying anymore. Let alone, it returns you some arguments you do not want. Well, make it an alias as git-cmp. git cmp master..develop is so simple. Here is the screenshot for git tree: 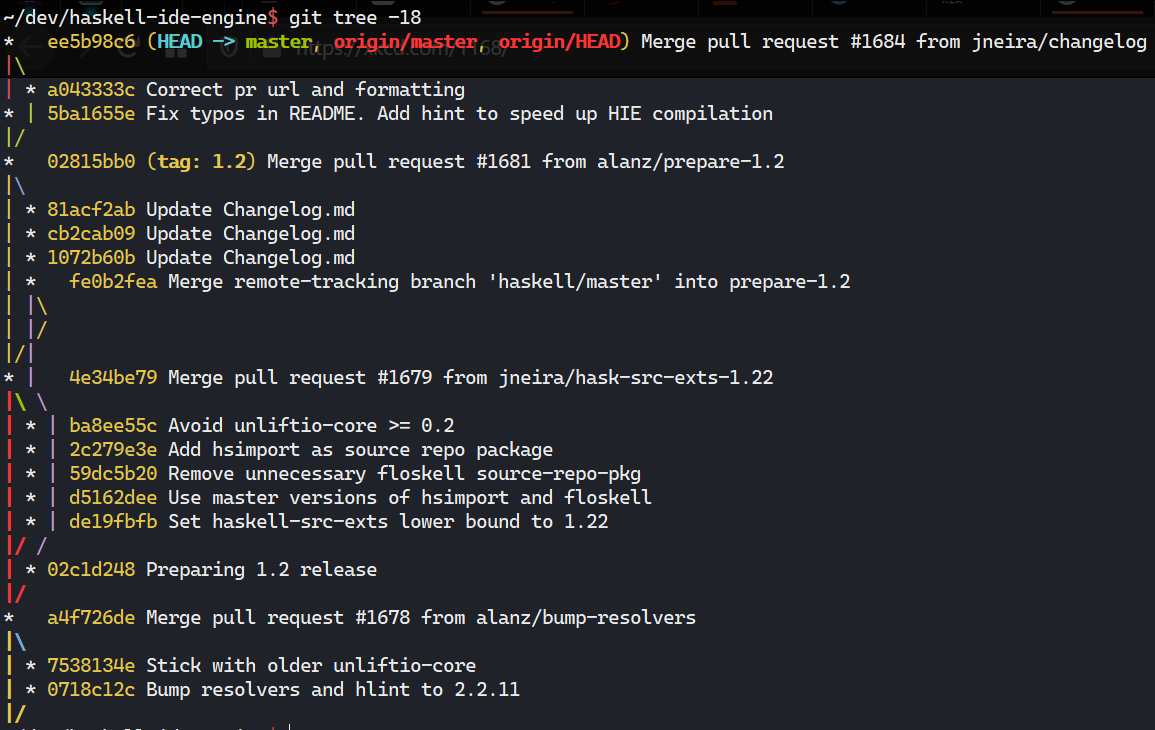 . Some shells provide alias such as alias ll="ls -l" or alias ls="ls --color=auto" by default.

To sum up, hackers just like to automate to improve productivity. I did not mention PowerShell, because it's designed for scripting than used as a shell on daily basis. Its ecosystem is not comparable to *nix shell, either.